Since opening the doors to their open beta back in January, ISI have been relatively quiet on the development of rFactor 2.  The sim, pushed to a beta at quite an early point in development, has come in for mixed reception, with division in the community as to whether it is the next “sliced bread” or not.  Meanwhile, development has plodded on, and with each new build released to the baying public there are improvements in almost every area. Sure, sometimes those improvements are subtle, sometimes you have to really dig, but for the attentive, it is clear to see that rFactor 2 (rF2) is developing into a vehicle simulation of quite some scope.

One area that until recently has remained limited for rF2 is in licences for real world tracks, cars or series. Naturally, some feared that this may persist, and then the Brabham BT20 was announced, and a little sigh of relief was heard. Still, much of the content in rF2 is a familiar picture named with an alias, and you get the feeling that ISI may not have as many dollar bills to throw at licencing as some other sim developers can muster.

This made it very welcome news to hear of the agreement signed by ISI to licence the FIA Formula Two series within rF2.  Formula Two (F2), in its current guise, features a field of young, up and coming stars, trying to make their mark on the motorsport world in high powered single-seater racing cars developed to specification by Williams F1.

The original brief for Williams F1 when developing the JPH1B for the revived F2 championship in 2008 was to find a balance of performance somewhere between Formula Three (F3) and Formula One (F1).  Other series, such as GP2 and Formula Renault 3.5 were proving too expensive for many F3 graduates, and so the FIA sought to bring in a more affordable alternative, that would still provide a valid stepping stone for drivers to be able to make the jump to the top category.

The JPH1B (named after MSV’s Jonathan Palmer and Williams F1’s Patrick Head) began production in 2009 with a carbon fibre composite monocoque chassis, full length underbody venturis and many safety design features dripped down from F1.  The aerodynamic design, based around allowing close racing, but not at the expense of solid aerodynamic grip, pushes 40% of total downforce production on the underbody “ground effect”, allowing over 900kg of downforce to be produced at around 150mph without too much focus on the front wing. Thus, the cars should be able to run closely in a race without fouling their airflow and losing front end grip.

The powertrain, derived from Audi’s 1.8 R4 20v turbo engine, produces some 425hp as 8250rpm, in race trim, with an overboost that temporarily raises output to 480hp for short bursts.  Tuned up from the road car base by motorsport engine specialists Mountune Racing, the unit differs considerably, with lightweight crankshaft, connecting rods, pistons, valves and camshafts as well as a dry sump configuration that allows a lower centre of gravity.  Mountane also fitted a Garrett GT35 turbocharger unit with roller bearings for improved response, and an external wastegate with high speed closed loop pneumatic valve boost control, for absolutely precise automatic boost control.  All this contributes to turning the engine from a family hatchback into a rip-snorting, fire breathing, racing engine.  Power is delivered via a six-speed wheel mounted, sequential paddle shift, and hand operated clutch, helping to prepare a driver for F1 technology.

I had the chance to test ISI’s upcoming new mod for the rFactor 2 beta, which introduces the JPH1B into the simulation, to get a feel for the driving technique, and to bring you guys a little preview of what is coming up.

In the pit lane the JPH1B sparks into life with a gratifying bark. This car carries with it a unique sound, with a snorty, rough and ragged bustle, as the revs “hunt” to find a suitable idle while the turbocharger spins up and starts to whistle, you really get the feeling that this is a four cylinder lump tuned to the very peak of its capability. 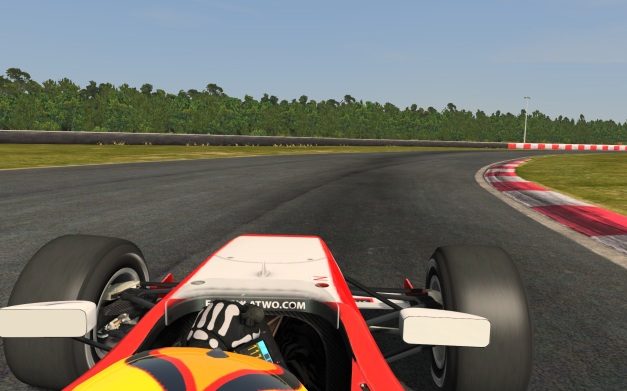 A little mid corner understeer is to be expected.

Pulling onto the track the JPH1B feels very stable as the speed mounts, with a tendency towards understeer inherent in its base setup, the car slices into apexes on turn in but has a tendency to push mid corner.

The ground effect makes for a rearward centre of pressure on the car’s downforce points, so the rear end can be very stable and malleable at high speed, as considerable aero grip is generated, making it possible to be more aggressive with the steering and throw the car into corners – not so easily done at low speed.  The tendency towards understeer, as such, at high speed is still present, as the front wing is not as effective as one might wish and the ground effect really comes into its own, sucking the rear of the car onto the track.  Naturally, setup work could well change this balance, but with such a rearward bias of aero grip, it’s going to take some engineering.

Where the F2 car differs from F3, Formula Renault 3.5 or GP2 considerably is in engine performance is in the lower range. The turbocharger gives the engine a much flatter torque curve than is conventionally seen by the highly tuned in-line four in an F3 car, or the higher output normally aspirated engines seen in the higher Formula series.

The below video shows a “driver eye view” of a few laps in the F2 car.

The Audi powerplant is not the tamest of beasts. With a huge delivery of torque arriving from the turbo at very low RPM, getting out of corners cleanly can be tricky, with a kerb weight of only 570kg the punch of the engine can make for a very challenging drive indeed, and modulating the throttle on exits becomes a key factor when it comes to staying on track.

As a result the driver has to wait until the car is nice and straight before really putting in big throttle inputs, this makes for a smooth, clean style with the car and reduces the amount of mid-corner “playing” you can get with some single seaters to balance out the inherent understeer of a mid-engined car, instead you can find yourself dancing on the throttle pedal, keeping the opening very small to keep things spooled up for the exit.  When the power does come, allied to that almost terrifying turbo shriek, the car is very fast, and can build a head of speed in no time, with the overboost button giving another 80bhp to aid overtaking moves. Thankfully, the lightness of the car, and its carbon brakes, mean it can bleed off speed even quicker, leaving braking distances sometimes shockingly short as the Yokohama tyres chirp and squirm in protest.

With a very positive initial turn-in bite, the tyres respond well to being heavily loaded on entry and mid-corner, but harsh and fast inputs can cause the grip to ebb away rapidly. This makes the tyre more suitable to a more precise driving style, drivers preferring to brake deeper into turns will find the tyres less tolerant of combined loads, causing the rear end to come around and ruin their day. As outlined, this is similarly apparent on exits, where the tyres are far more tolerant of longitudinal forces when the lateral force has started to die down.

Below is a video of an awesome race in the F2 car.

As a single-seater in rFactor 2, the F2 car goes up against the established Formula Renault 3.5, which comparatively is very different in feel as the cars differ in almost every dimension, at the same time; they arrive at similar lap times. Whilst the Formula Renault’s engine is more usable in the lower rev range, it becomes a handful at higher revs, which is quite the opposite of the Formula Two car. However, with both cars employing ground effect to generate a significant amount of downforce, they are both similarly skittish on the limit, and can be very wilful on bumpier tracks.  Overall, I feel the Formula Two is a more enjoyable car to drive, as the turbo “kick” presents an interesting new throttle technique that makes for a more adventurous lap, while the normally aspirated car becomes all about being precise and smooth, the Formula Two car can be hustled more, and time can come from really pushing.

It won’t be long before all rFactor 2 beta subscribers will get their hands on this car to try out, here’s hoping for some packed online servers for us all to enjoy. 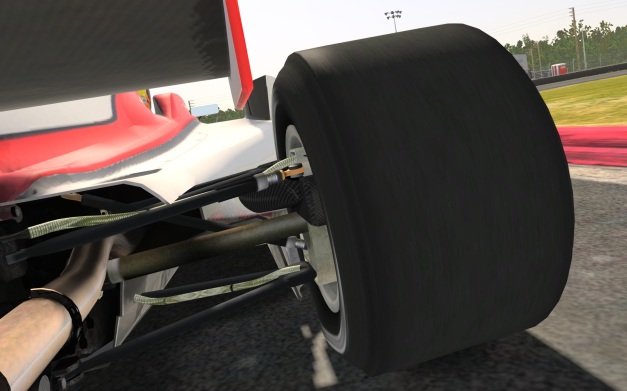