I’m sure I could smell last night’s booze on his breath when he passed me the keys to the DAV XF outside.  Might explain why I was given the contract, and why it was so lucrative. Still, it’s nearly eleven PM on a warm summer night here in Paris and I need to get this little lot over to Dusseldorf by tomorrow morning; it’s going to be redeye.

Slipping into the cab I familiarise myself with things.  Not sure about the wood veneer panelling but I guess the Dutch like to do things a little differently.  The dashboard is laid out nicely and I think I can come to terms with the various switches that turn six slots in the gearbox into twelve total gears. With the key in the ignition, the 410hp, 12.9 litre diesel lump rumbles into life. Mirrors-check (all six of them), warning lights-check, huge trailer with two massive diggers on it-check.  Time to go, before they realise that I’m a sim-racing driver! 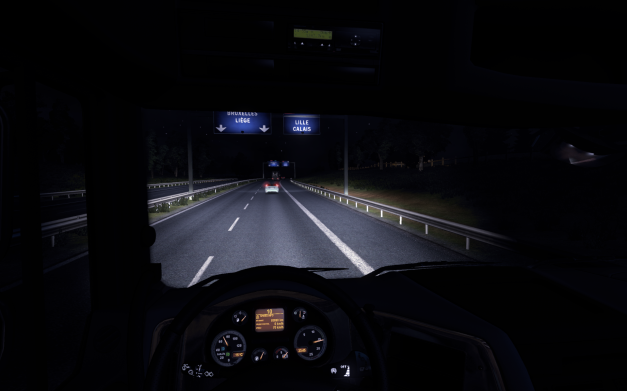 The early scene in European Truck Simulator 2 (ETS2) has you setup as a jobbing truck driver, borrowing trucks here and there from companies that aren’t quite Eddie Stobart or Norbert Dentressangle, and driving various loads around Europe;  the pre-cursor to buying your own truck, and becoming a lone-wolf on the open roads of Europe.

The design works well, and introduces you to the various trucks on offer before you hit the dealerships as a buyer.  You’re also given a gentle introduction to the game by being given pre-planned routes and deliveries.  Consequently you don’t have to worry so much about fuel loads or whether you need forty winks or not, and can get on with the important business of driving huge, great hulking trucks around Europe.

Finally, out of Paris.  That ring road is a bitch; just when you’ve got going and you’re shifting up into ninth for a cruise, some traffic lights come along and you’re back to a full stop again.  Green… moving, first-third-fifth-seventh-ninth that’s forty kilometres per hour reached!  Oh, what’s this, the lights ahead are green, but all these idiots in cars don’t seem to be GETTING A MOVE ON, AAAARGH, don’t make me stop again. Bah, too late.  I stop two centimetres short of the Ford Focus ahead.  Hopefully they were terrified when my looming grill appeared in their mirror; I hate the guy in that Focus, I hate him so much.

Still, now we’re tramping along, nearly seventy five kmh on the dual carriageway before turning off on the Autoroute direction Bruxelles.

There’s something intrinsically relaxing about all this.  Once you get up to speed and have your truck settled into the inside lane at a spritely ninety kmh, you can just relax a little as the dashboard lights illuminate your dials and the road ahead pours into view of your dipped headlights. Occasional bursts of main beams make you feel suddenly blessed with sight-beyond-sight, but then something always comes the other way.  The soothing hum of the motor, which pushes out maximum torque between 1000 and 1410rpm, becomes almost hypnotic and can be supplemented with your own MP3 collection to offset the “long blinks”.  It’s a far cry from racing engines tearing out 14000rpm plus.

We’re into Belgium now, that’s me and my truck, heading for Liege on the E42.  It’s still very dark, nearing four in the morning, not much on the road but me and my truck driver brethren.  To the south of Liege is a trio of Belgian villages, Spa, Malmedy and Stavelot. The route between them became a race track some time ago, and as I approach the German border I find myself silently amused by the concept of driving my loaner DAV (And yes, it should be DAF, but the guys at SCS Software have not managed to get all of the trucks licenced before release) around the historic Circuit de Spa-Francorchamps.

Border control seems pretty relaxed; there goes the “Willkommen nach Deutschland” sign and I didn’t even have to turn off cruise control.  Though I was partially lucky, it seems ETS2’s AI are not quite as perfect as they could be; a lane closure had caused them to line up parked and so I had to do a fairly alarming swerve to avoid them as I careened onwards, daydreaming about the masta kink.  On the whole, however, the AI impress. Lunatics in Range Rovers overtake you on blind crests, which seems pretty accurate, and it was to great surprise, when waiting at a junction, that I noted a car had stopped and was flashing to politely let me out.  What a nice guy.

On the whole, though, the same things that afflict you in ETS2, AI wise, will be the same things that probably cause most real life truck drivers to develop a weeping, pulsating ulcer in their gut (not AI truck stop dinners!).  Every time you get a good bit of momentum up, some car driving dick pulls out in front of you and causes you to have to brake to a near stop.  Then you get to exercise your clutch leg all over again as you scale up the many, many gears to get back up to cruising speed, no doubt to have the next unfeasibly stupid idiot pull out of the next junction, the other side of a blind crest, to make you throw out the anchor again. 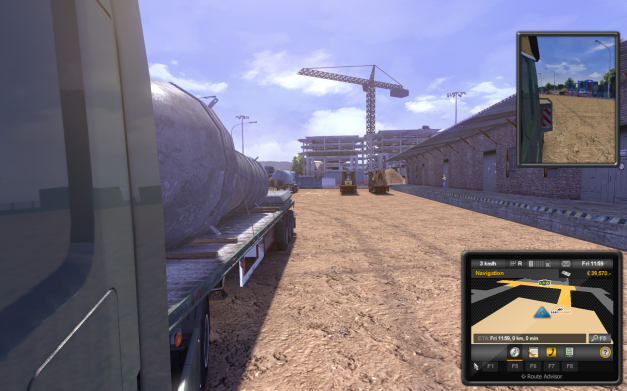 This bit is not easy!

Playing this game with a sim-racing “rig” adds a vast amount to the experience. An H gate shifter and clutch pedal are a must, though automatic gear options are there, how better to really test your driving skills than to get as close to replicating the real vehicle as you can?  And this is the key, I think, to why I’ve been enjoying ETS2 so much this week.  It’s all good and well launching into apexes and controlling powerslides in race cars in various racing sims, but that is only one part of what driving really is about.  How difficult or easy you may find it to keep a simulated race car on track is a very different prospect to backing an articulated truck into a tight spot around the back of the depot in Bremen in heavy rain.  Initially, getting these wheeled buildings around a corner in town without knocking over lamp posts and traffic lights can be a challenge, let alone double-declutching it up a steep slope, or keeping it from running away down one.

As virtual drivers these are things to be relished.  The test of your driving skills is why people boast about laptimes so much in simracing; Scania Truck Driving Simulator (SCS’s last title) gave us challenges to test this mettle, and a global online leaderboard that frankly terrified me!

I’ve just missed my turning. What am I doing? I am such a buffoon.  Right, okay, where are we?  It’s getting a bit light, I should have turned off north to Dusseldorf but I am still heading east.  How bad can it be? There’s got to be a junction where I can turn around, I’ll get off at the next one.   Here we are, E41 to Frankfurt, that’s south but there must be a way to get back going the other way. There isn’t. No…  No… NO!  It’s knocking on for six AM and I am driving AWAY from Dusseldorf, I need to be there for ten, and what, now my avatar seems to need sleep, he’s doing long blinks, ACTUAL ON-SCREEN LONG BLINKS! Okay, calm down Jon, this can’t be the end of the world, you can turn around at the next junction, yea, you thought that before didn’t you. It’s one cock up after another for you Denton you useless excuse for a human. 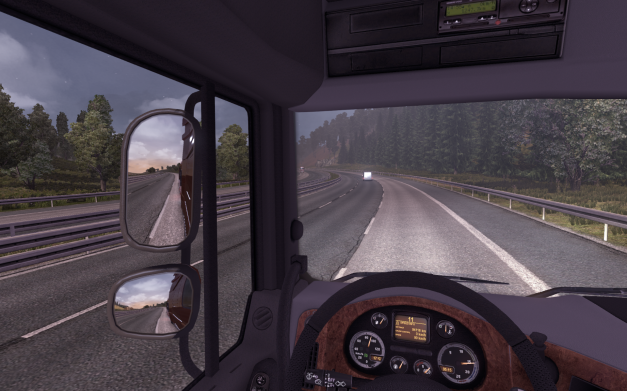 Dawn breaks on my wood veneer.

Here we go, an Ausfahrt, this will have to do. It’s a tight one, not really designed for taking a trailer of this girth around, but sod it.  Hmm, bit of grass, she’ll be alright.  Okay, we’re on the way now, the E41 north, it goes to Dusseldorf, perfect!  The sun’s just coming up in my rear view mirror and I feel the need to torture myself fading away with every virtual kilometre.  I pull into the depot and park up.  Amidst the long-blinks, I made it.

Stepping out of the cab at quarter past nine I ask the lads in the unloading bay if they know where I can get a coffee; they direct me down the road and into town.  Time to find a B&B for some shuteye, then its back on the road for me. 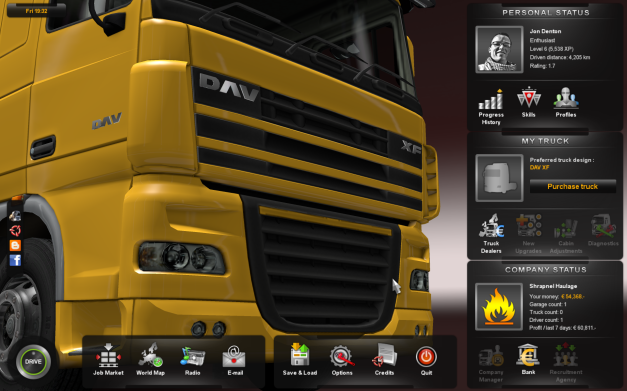