The Last of Its Kind.

The lines, the vents, the power, the silent fury that no torment can tame.

I’m starting to push.  The last hour or so has been all about being careful, slow, and respecting this beast, but it has still bitten me so many times. Working up slowly seemed apt, but it was nearly impossible. The rip-snorting twin-turbocharged V8 behind me is never calm; when the boost pressure comes up it tears at the 335 section slick tyres at the rear as if they were nothing. Screaming, whistling, popping and banging; it’s nearly impossible not to end up going too fast…

Braking deep now, deftly pushing the pedal knowing that too much pressure will lock the fronts and see me skate off the road, but too little won’t slow me from the seemingly absurd speed with which I am covering ground.  The nose shakes as the front right chirrups to a stop. I gently release my foot, then re-apply; careful, precise movements amongst a cacophony of violent turbulence. I pivot my right foot as my left pushes the clutch, maintaining considerable brake pressure as my heel bats the throttle and I push the stick forward into second.

The discs are ferocious: they can stop just over a tonne of rampant red irascible motor car in short order. But once that V8 is on full song, the speed that gathers before the next braking point can easily catch me out and leave me hanging on through long braking zones silently begging the speed to bleed away before…

Huge steel discs are the claws of this monster, but their power is too fierce, they can lock at any time, ripping and tearing at the ground for purchase.

Turn-in, the rear is loose, the front is tight. It’s heading for the apex, right where I want it.  This is too good to be true; for a brief moment the demon submits to my will and slices toward the apex, more ballet dancer than brute.  It doesn’t last. The rear is too light, but that motor is not, and it brings its weight to bear as the rear end starts to come around, helping the car pivot into the corner but I know it’s going to need to be reigned in.  I need to get on the throttle, but I am scared of it. In second gear, at this speed, one centimetre too much throttle and I will spin, but if I don’t act now that spin will be inevitable.

As I tap the top end of the throttle travel, holding boost whilst avoiding too much torque build-up, and apply a swipe of opposite lock she holds steady, and under light throttle the rear dances to my tune, pushing the tyres to the limit of spinning up on the short straight.

These are the moments where it feels right, where the man can control the monster; the envelope of control is small, but when within it there is a sense of satisfaction that cannot be matched. Short bursts of pleasure before the next worry, the next concern, the next time the wild animal bites.

Hard on the brakes again and moving over the track to attack the next, even slower, turn.  Still in second, I turn in and once again she slices at the apex like a viper, inside wheel rolling over the kerb then we’re out again. Gingerly on the throttle, slowly building up pace, I crank her up into third as the next turn arrives alarmingly quickly. Left, positive camber, early entry and take the left-front as close to the kerb as you dare without clattering it and throwing the chassis off course, all the while daring, slowly, to push the throttle through the turn, knowing that when that turbo reaches sixteen pounds-per-square inch of rage the balance could change enormously. It comes. The rear breaks, a slight lift but the power doesn’t stop in an instant, I’m on opposite lock again, modulating throttle and trying to keep the back end in check as I drift towards the exit kerb…

It’s coming. Can I hold it on the road? Fear strikes at me and doubt riddles my concentration as I search for a way to stop this descent. The beast feeds on fear, it revels in my doubts, it wants me to fail, it is the last of its kind and it will not be tamed.

Grasping the wheel for dear life the outside wheels run up to the exit kerb and slide halfway up along it, pushed back to the relative safety as we scream to the 7800 rpm redline. Clutch, fourth, really moving now, heading down the Wellington straight to the next adventure.

In this car, this beast, this monster; every braking area, every entry, every exit, every time you touch the throttle, is an adventure. This supercar defines the genre and generates a passion that some of its contemporaries could never attain.

The last great stallion from its stable, this is the last car that was directly commissioned by Enzo Ferrari before his death. This machine exemplifies the Scuderia’s myth perfectly. Created forty years after the first born, the number of the beast is F40, and it will not be tamed. 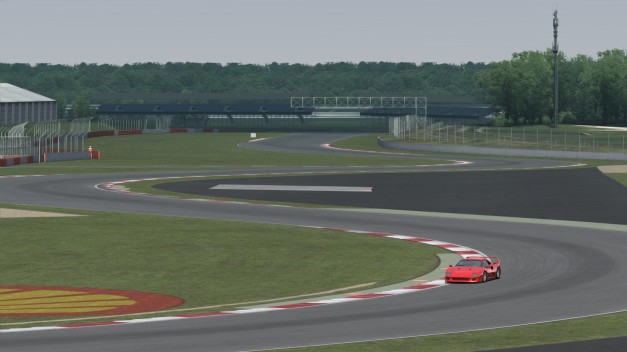 6 comments on “The Last of Its Kind.”