When I saw the announcement for build 85 of the rFactor 2 beta a few weeks ago, there was a small re-awakening within me.  It had been some months since I had done much driving in rFactor2 (rF2), as Alex Martini had lured me into machismo fuelled contest during iRacing’s first season of 2012 which had more or less consumed all of my simming time since the rF2 beta surfaced around Christmas 2011.

However, Alex’s assumptive attitude that virility, courage, strength, and being able to do fast laptimes in pretend racing cars, are concomitants of masculinity was soon assuaged, and the season fizzled to a unremarkable end like a squib that had been left in a toilet bowl.

The result of which was that all involved felt it was time for a change. It often remarks me in the simracing community how many people stick to one sim for their simracing times. Sure, we all have limited time to spend with our hobby, and chopping and changing can really affect competitive performance, but there can often be an attitude that one sim is the greatest and all the others are somehow hugely flawed. Partly propagated by the tendency for exaggeration and questionable literacy on online forums, this attitude is more or less common to all sim communities, and it’s a saddening reflection on a genre that, in reality, is provided for with some very strong products across the board.

What remarked me on the release of the rF2 beta, was how many people there were that decided it was no good (and demanded a refund) within what surely could not have been more than an hour after download.  The rF2 forum was alight with people saying “it’s a beta, it’s not going to be perfect” which rings some truth, but at the same time, how can anyone truly judge any sim without getting some serious laps under their belt?  I’ve been doing this a pretty long time, and I would say it still takes me a good few hours, sometimes per car to assess how good or bad a given sim’s various simulated components hold together. Sometimes this can be an even longer process if one’s mind is attuned to another simulator, where hours and hours of gameplay leads one to adapt to the foibles of a given product.

The early builds of rF2 were a blend of good and bad. the graphics were not top notch in the first public betas, and certain hardware configurations had strange problems here and there.  The driving model itself felt good, much of this feel came from the superb force feedback, but it was not without its faults.  The tyre model, whilst a clear improvement on rFactor 1, still felt very “WIP” (as it, quite rightly, still is), and so there seemed to be a rather severe drop off sometimes in rear tyre grip, and combined loads were not being dealt with very well by the physics engine. At the same time, temperature modelling and slide recovery, allied to the high speed controller response, felt natural and very drivable.

It varied per car, and in the first builds I would say the the above characteristics were more apparent on lighter cars, and on the Formula Renault, which was slick shod, it was far too apparent.  In recent builds, this has been greatly improved, and the Formula Renault has become very much a joy to drive fast.  No longer does it feel on a knife edge in the fast stuff, and spin like a top in the slow stuff.  Now you can push the tyre, especially under heavy aero loads, and whilst is sometimes skips over the bumps in the surface in a rather gratifying way, you never feel like the car is barely under your control.

In a brief return to the aforementioned overly competitive nature of our hobby, I promptly start to get questions from friends who are planning to try out the new build, the first almost always being “What laptimes are you running?”

As was alluded to in my rF2 article in the December 2011 issue of AutoSimSport, such a question is not so easy to answer any more.  You see, running laps in rF2 s not the same as most other sims. To simply say “I did some laps at Sepang” is not enough, this could mean any number of varying track conditions that could bring a similar number of different potential laptimes.  If you want to tell someone about how you popped out for a spin in rF2, you have to write a little story.

“I arrived at Sepang International Circuit as the sun was just cresting over the top of the palm trees to the east beyond turn four. The track was clean from the previous night’s rain. At 8 am the oppressive Malaysian heat was rising up from the overnight lull and it was already 27 degrees as I peeled onto the circuit, with a mere 12kmh northerly breeze to take the edge off.” 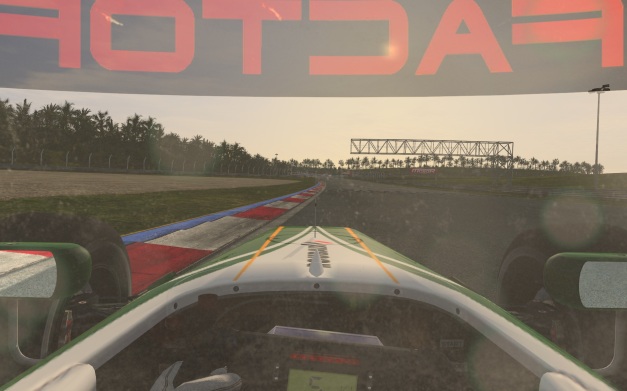 Of course, the story above made for clean, fast laptimes flowing nicely, tyres keeping themselves tidy and in a good heat zone. But then, as the day progressed and the Malaysian sun beat the temperatures up to a hearty 36 degrees, setup changes became inevitable, my on-board HUD telling me that brake and engine temperatures were nudging into the red, and with each passing lap keeping the tyres within their performance envelope became a chore. In I came: “Bigger brake ducts, adjust radiator opening, to hell with the drag, and drop a few PSI out of each tyre, my good man!” I bellow at my non-existent race engineer, imagination on overload.

Much like real life, running a laptime in rF2 is very much about the time and the place. On a nice, rubbered in track, under light clouds and favourable breezes, a 1.55s lap at Sepang may be a doddle.  On the same track, not rubbered in, on a 38 degree midday sun and a heavy southerly wind making the direction change in turns five and six more of an adventure, you may struggle to get into the 1.56’s. But this is how it is, and anyone else on track at the same time has it the same way.  This, in itself, becomes the antithesis of the simracers laptime quoting urination contests, as finding the right wind and track conditions, and having the AI punt around for an hour to rubber things up, can produce times well above what you may be able to run in a race session. And let’s remember, its how the track is when you’re all on it that matters.  The fact that the track is oriented correctly for the sun, and that shadows move in exactly the same patterns you see on the TV, only adds to the experience (How long will it be till someone creates a mod to automatically update to real world weather every 15 mins, MS Flight sim style?).

What this does contribute to is atmosphere.  rF2 oozes atmosphere, especially after the graphical changes brought with build 90. The colours so deep and involving, the shadows, in the right place at the right time, it feels right, believable and not at all static and pre-engineered. It gives the driver more to think about than just finding the fastest time, it makes them think about how the circuit is behaving, where the grip is, will that part of track be cooler in the shade? Will this part still be damp from the rain half an hour ago?

For me, atmosphere has been something lacking from many of the “online only” brigade of sims that have propagated over the last ten years. Crammond’s GP series was lush with the kind of detail that really got you involved in the moment, and GPL made me both despise and respect the AI version of Jim Clark, for his unerring pace, immeasurably.

Build 90 of rF2 introduced the officially licenced 1966 Brabham BT20, and with it the Brianza historic track, which to the uninitiated is a representation of Monza from an age before chicanes. This track, filled with so much history, and passion from the annals of motorsport is a joy to drive. Beautiful in almost every detail, powering through the trees, in side-by-side slip-streaming battles with good friends almost brings a tear to the eye.

Morning sunlight dapples through the trees at Lesmo one.

With a highly accomplished sound engine that almost allows you to place braking points using the ear alone as you “whoosh” past heavier trackside objects, an ever growing portfolio of tracks and cars, and flawless netcode, rF2 is shaping up into what looks like a very promising package in the long run.  After the over-serious and dry atmosphere seen in some racing sims, rF2 is a breath of fresh air where, in recent days, for me, the fun has really been put back into simracing.

Powering out of Curva Grande, with the Repco V8 on full song.