Kunos does it again…

Posted by shrapnel1977 on November 25, 2010
Posted in: Kunos Simulazioni. Leave a comment

It’s easy, amongst all the recent furore concerning iRacing’s upgrades, F1 cars, and major console releases, to fail tot notice that netKar Pro received quite an update itself in recent weeks.

Stefano has been beavering away all year, almost silently, and just popped up with this, a new car in the form of the Formula KS2.  Looking eerily like Ferrari’s F2004 based A1GP car, this car neatly fits into the nKPro single seater ladder, with fair downforce levels and decent grunt.  If anyone felt the Formula Target wasn’t quick enough, this should fit the bill.

It may not be as fast as FVA’s Ferrari, which shares common bloodlines (sim-wise), but personally I think that is quite a good thing.  Modern F1 cars are seriously fast and take some major practice to be quick, I climb out of the F10 feeling mentally drained.  At least in the KS2 I feel like I can handle the car. 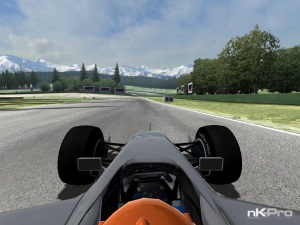 To drive, as ever with nKPro, the feel is magnificent.  The tyre model feels fantastic and the feedback offered by the car as one scoots over the bumps of Aosta is as intuitive as simracing gets.  As it stands, no other sim offers quite the driving experience of nKPro when it comes to tyre management, setup accuracy and, in some areas, basic features.

It still amazes me that, after all these years, nKPro is the only sim with visible tyre wear, or the facility to get out of the car and take a look at that wear.  With rain on the way I keep finding myself drawn back to this fantastic sim that introduced visor dirt built up and clickable virtual cockpits.  This new car has breathed a new lease of life into the sim that likes to keep the competition on their toes.  Anyone that hasn’t tried it really ought to, it’s the closest thing to driving a real single seater you can find on a PC.